Ordering Green Walnuts
We sell green walnuts for the short time that they are in season which is usually from early December to early January. Because the picking time varies from year to year depending on weather conditions we usually take orders for green walnuts from December each year and dispatch as walnuts are ready for picking. This year our season is a little later so we expect to start taking orders from mid November 2017.

Green walnuts is the usual name for immature walnuts that are ready for pickling and other uses such as described in Wikipedia.

GREEN WALNUTS ARE NORMALLY ONLY AVAILABLE FOR CUSTOMERS LOCATED IN AUSTRALIA 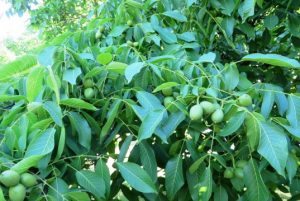 According to Wikipedia 'In some countries immature nuts in their husks are preserved in vinegar. In England these are called "pickled walnuts" and this is one of the major uses for fresh nuts from small scale plantings. In Armenian cuisine, walnuts are preserved in sugar syrup and eaten whole. In Italy, liqueurs called Nocino and Nocello are flavoured with walnuts, while Salsa di Noci ("Walnut Sauce") is a pasta sauce originating from Liguria. In Georgia, walnuts are ground along with other ingredients to make walnut sauce.'